West Ishpeming, MI – January 31, 2020 –The Ishpeming Hematite girls ended the month of January with a tough loss. Tyler Young and Bob Nadeau were in on the action on 98.3 WRUP.

The Hematites started the second quarter off with the ball. Patriot Madelyn Koski bumped the score up with a basket 13-9. Mallory Leece followed behind with a two 15-9. Poirier received her second foul. Patriots scored another basket 17-9. Leece flew back in with a three 20-9. The Patriots kept scoring basket after basket, Poirier was able to score a few more points for her Hematites. The second quarter ended with a score of 29-14.

Hematite Olivia Corp started off the third quarter with a basket right away 29-16. Prohet threw a three in 32-16. Miller received a foul, Corp went to the line she made a free throw 32-17. Mead received her first foul Prophet went to the line, but missed both free throws. Corp threw up a left handed hook and scored 32-19. Hematites fouled again and Patriot Karlie Patron threw in two free throws 34-19. Tessa Leece found her way inside, and stole the ball she scored a two 36-19. Poirier was quick to throw in the ball 34-20. Mallory Leece threw in a few more points 41-22. Mead got her own rebound and scored 42-24. Patron ended the third quarter with a three 45-24.

The Hematites tried to come back stronger in the fourth quarter. Patron continued to work hard on the court she scored another bucket 47-24. Tessa Leece went up with a smooth layup 49-26. The Patriots fouled, Nyman manged to score one free throw 49-27. Hematites quickly received another foul, Madelyn Koski scored two free throws 51-27. Patriot Meghan Johnson followed with a three 54-27. Nelson worked her way inside with a two 56-27. Corp dropped a three in at the end of the game 58-30. The Patriots kept the win in West Ishpeming 58-30.

Join Tyler Young and Bob Nadeau Monday, February 3rd as the Ishpeming Hematite girls basketball team play against the Iron Mountain Mountaineers. The pregame show will kick off around 6:45pm on 98.3 WRUP.

Listen to the game here!

Getting ready for the game! 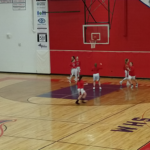 Trying to get by!

Going up for a shot!