Negaunee, MI – January 21, 2019 – On another cold January night, the Ishpeming Hematites girls basketball team took the court against their rivals the Negaunee Miners. As always, Tyler and Bob were right next to all the action, broadcasting it to you live on 98.3 WRUP and on WRUP.com!

The Negaunee Miners got out to a very fast start, building a five point lead in just the first 1:30. However, the Ishpeming Hematites fought hard to gain back some ground, and they shaved Negaunee’s advantage down to three points near the halfway mark. At two minutes left in the first, Ishpeming managed to tie the score at 11-11, effectively resetting the game. As the final minute of the first quarter approached, Ishpeming took the lead from the Miners and were able to hold it until the first buzzer.

The Ishpeming Hematites and Negaunee Miners prepare to watch the coin flip during their game Monday night on 98.3 WRUP

It was a tight contest through much of the first half, as the Ishpeming Hematites fought hard to keep up with the Negaunee Miners. Just like in the first quarter, the Miners began to pull away from the Hematites early in the second. 24-17 was the score with just under three minutes left to play in the first half, but the Miners drained another three to give themselves a 10-point lead. It looked like it was going to be a tough second half for Ishpeming, as they were still trailing by almost ten points at the end of the first half.

The Ishpeming Hematites on defense against the tough Negaunee Miners on January 21st, 2019

The Ishpeming Hematites started the second half of play in possession of the ball, and they seemed aware of the mountain that they had to climb to overtake Negaunee. Ishpeming stayed within nine points of Negaunee for the first minutes of the third, but time was running low for the Hematites. Foul trouble became an issue for the Hematites when they began to strategically use fouls to slow Negaunee’s scoring. However, the Miners were soon in the very same position, and both teams were in danger of giving up extra points. In the final seconds, Negaunee was able to add even more to their lead, bringing it to 14 points before the buzzer.

Trailing by fourteen going into the final quarter, the Ishpeming Hematites‘ bench and fans were unusually quiet, but nobody on their side of the court intended on giving up. The three previous quarters seemed to wear down Ishpeming’s stamina, and soon the Miners had a 20-point lead at 45-25. There were some rays of hope for the Hematites as they closed the deficit down to 15 points, but time was running out. It was 51-33 with just under two minutes to play, and Negaunee ate away at the Hematites’ optimism.

Listen LIVE – The Ishpeming Hematites take on their rivals, the Negaunee Miners in Negaunee on Monday, January 21st, 2019 on 98.3 WRUP.mp3 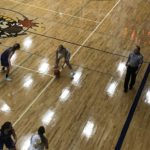 Ishpeming Guts Out Win Vs Negaunee, 20-8