Rodgers Returns to Form as Packers (38) Knock Off Bears (17)

CHICAGO, IL – 9/29/2014 – After a disappointing performance in Detroit last week, Aaron Rodgers had one word, and five letters to say to Packers fans this week:  “R-E-L-A-X” is what Rodgers had to say this week leading up to the big divisional game against the division rival Chicago Bears.  Those who listened to the three time pro-bowler had their faith rewarded, as the Green Bay Packers left Chicago with a 38-17 win under their belt.

The game didn’t start off so hot for the Green & Gold, as Jay Cutler marched the ball down the field on a 15 play, 80 play drive that ended on a six-yard touchdown pass to Brandon Marshall.  The Packers would respond in only a quarter of the time; scoring on an Eddie Lacy two-yard touchdown run on a drive that lasted just over two minutes.  The game looked to be turning into a shoot-out, as both teams scored on nearly every drive in the first half.  Jay Cutler & Matt Forte were able to drive the Bears down the field resulting in two scores:  A 23-yard field goal by Robbie Gould, and an Alshon Jeffrey eight-yard touchdown pass.  Rodgers and the offense were able to match the Bears tit for tat.  Rodgers would find both of his favorite two targets for a touchdown pass each, as Jordy Nelson (3 yards) and Randall Cobb (22 yards) were able to give the Packers a 21-17 lead going into halftime. 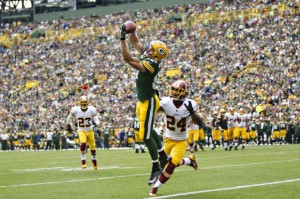 The shootout would not continue in the second half, as the Packers would do the rest of the scoring.  Getting the ball first, Green Bay moved the ball well, but stalled out in Chicago territory leading to a Mason Crosby 53-yard field goal.  The Bears would march down the field well, but a tipped pass ended up in Clay Matthews’ hands and the Packers would turn that into another Jordy Nelson touchdown catch, this time from 11-yards out.  Going into the fourth quarter, the Packers led the Bears 31-17.  The Bears’ comeback hopes ended when Brandon Marshall ran the wrong route, and CB Sam Shields intercepted Cutler for a second time.  The Packers responded with yet another touchdown pass to WR Randall Cobb on a three yard flag route, giving the Packers the final score and a 38-17 win!

Aaron Rodgers posted a very impressive stat line, going 22-28 for 302 yards and four touchdown passes.  The Packers’ receivers responded as well from a poor showing in Detroit with Randall Cobb catching seven passes for 113 yards and Jordy Nelson catching 10 receptions for 108 yards; both caught two touchdowns.  Eddie Lacy still struggled to run the ball, posting only 48 yards on 17 carries, but did find the end zone for the first time in 2014.

For the Bears, Jay Cutler threw for 256 yards and two touchdowns while completing 22 of his 34 attempts.  Matt Forte turned the corner from his early season struggles, rushing for 122 yards on 23 carries.  The Packers’ defense was able to keep the Bears’ star receivers under wraps yardage-wise, as Marshall & Jeffrey combined for just six receptions for 59 yards.  Both did record a touchdown pass each, but both were inside the 10-yard line.  Most of Cutler’s damage was done when he looked for sixth year tight end Martellus Bennett, who finished the game with nine catches for 134 yards.

It’s a short week this week for Cheesehead Nation, as the Packers will be welcoming in the division rival Minnesota Vikings to Lambeau Field for a round of Thursday Night Football!  Join Wayne, Larry, and the crew as they’ll bring you all of the action.  Pre-game will begin at 6:30.  The game is set to kickoff at 8:30pm and you can catch the call right here with us, on Marquette County’s official Packers station:  98.3 WRUP!

Packers Come Up Just Short in 31-28 Loss to Steelers

It’s All Natural, so it’s Good for You… Right?